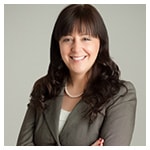 Debra Macleod, B.A., J.D. is a relationship author, coach and marital mediator whose programs, books, two decades of experience and “Fair, but Aware” approach have helped countless people rebuild their marriage on the foundation of a romantic partnership. She offers a practical and plainspoken and alternative to couples counseling and specializes in cases where one spouse is currently more motivated to work on the marriage.

How she started doing what she does:  After law school, Debra began doing divorce mediation. It was during this time that she first realized how many divorcing couples – including those who had tried couples counseling and other approaches– hadn’t received the type of direct and low-conflict relationship help that might have saved their marriages. As a result, she shifted the focus of her practice to marital / couples mediation designed to help couples stay together and opened her innovative Marriage SOS relationship coaching practice. Eventually, her practice segued into one which primarily helped individual spouses who were facing an uncooperative spouse, or a spouse with a different agenda (e.g. an ongoing affair), and who required unique guidance to bring a spirit of cooperation, commitment and collaboration back into the marriage.

Debra’s method combines her “hard” training in law, conflict resolution, mediation and communication with her “softer” experience as a marriage / intimacy author and relationship coach. It is an intelligently grounded, pragmatic and plainspoken way to approach relationship issues, one that appeals to men and women. Her trademark “Fair, but Aware” approach balances the needs, feelings, and perspectives of both partners, and offers real-world solutions for challenging situations.

Credentials:  Debra holds a Bachelor of Arts (with Distinction) and a Juris Doctor.  She is a trained mediator.

Media:  Debra has served as an expert resource for major media in North America and worldwide.  Her television credentials include FOX TV, CBC, GLOBAL TV, CTV, CITY TV and SHAW TV.  She has appeared on XM/SIRIUS Satellite Radio as well as numerous local, national and syndicated radio programs in Canada and the United States.

Debra has been seen in popular international women’s and men’s magazines, including ELLE, COSMOPOLITAN, REDBOOK, BRIDAL GUIDE, SHAPE, ESQUIRE, MEN’S HEALTH MAGAZINE, WOMEN’S HEALTH MAGAZINE, WOMAN’S ERA (India), TODAY’S PARENT, READER’S DIGEST and ENTREPRENEUR.  She has also contributed to various health and industry magazines, from APPLE to THE OGM (Oil & Gas).  Her pieces in THE HUFF POST have appeared in multiple editions including the USA, Canada, Arabi, Korea and Brazil.

In addition, she has been interviewed by the Associated Press and the Canadian Press, and her work has received worldwide coverage in such newspapers as USA TODAY, THE NEW YORK TIMES, THE LOS ANGELES TIMES, THE WASHINGTON POST, THE DAILY MAIL, THE DAILY TELEGRAPH, THE TORONTO STAR, THE INTERNATIONAL HERALD TRIBUNE, THE NATIONAL POST, SUN and other local, national and international newspapers.

Debra has also been seen in such popular web destinations as TODAY.com, CafeMom.com, canada.com, CBS.com, msn.com, the Loop by Sympatico, News.com.au (Australia), USA TODAY’s “Happily Ever After” book reviews blog, AskMen.com, SheKnows.com and others. Her articles have been syndicated to multiple web portals.

And personally: Debra has been married to her husband Don since 2001, and often collaborates with him to provide relationship help. They have one son.

Five things to know about Debra:

I am an international relationship / intimacy author whose books have been translated into several languages. I have served as an expert resource for, and contributor to, major media in North America and around the world.

I have a background in law, couples / marital mediation, conflict resolution and communication; however this “hard” training is softened by my work as a relationship / intimacy author and relationship coach – so don’t let it scare you! In fact, you should embrace it since it allows me to balance the needs of both partners, with insight and without bias, even when I’m only speaking with one. Indeed, this multidiscipline background is the foundation of my practice and “Fair, but Aware” professional method, which offers an alternative to couples counselling.

I am straightforward and plainspoken. My goal is help you save your marriage, and to do that we may have to talk about some tough things. I will tell you what you might need to hear, not just what you want to hear; however, I am always supportive, and never sanctimonious or judgmental.

I don’t just listen to my clients talk, complain or “vent.” Rather, I offer specific ideas and insight – workable solutions and a fresh perspective of their problems – for them to implement in their relationship immediately. Couples who are struggling need to see progress as quickly as possible.

I try to make my sessions as pleasant as they are practical. Clients need more than strategies to overcome their problems. They also need to be in the right frame of mind. I believe it’s wise and helpful to “laugh through your tears” when you can, even if it’s just for a fleeting moment. In fact this is sometimes necessary to gain perspective, maintain motivation and focus, and save your relationship (not to mention your sanity!) You can expect an encouraging and purposeful attitude from me at all times.